What is Fin Super and How Does It Work?

Fin Super is a liquid aerosol spray that contains millions of microscopic solid lubricant particles. It is a truly unique product. There is nothing else like it on the market, and as a result, there is nothing else that performs like it, either. It is the perfect all-around lubricant and protective coating spray for fishermen to use on their equipment. 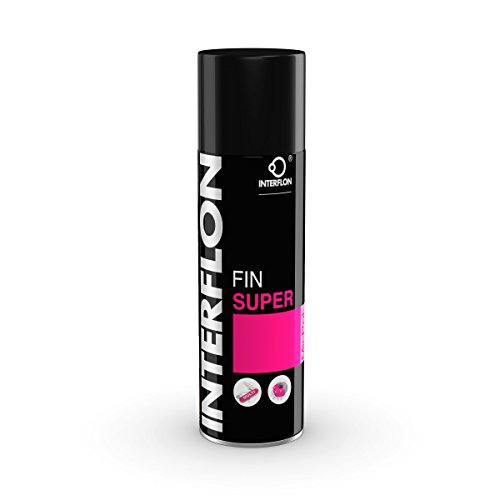 Interflon Fin Super 300 ML Can
$27.88
Check Current Price
We earn a commission if you click this link and make a purchase at no additional cost to you.

Fin Super is a lubricant and coating spray that contains MicPol®️, a micronized and polarized lubricant technology. This means two things:

Even better, Fin Super goes on wet, dries quickly, and forms a solid film that leaves no greasy residue. If you touch it, your finger comes away completely dry. It won’t wash off, and it prevents water from ever touching anything it coats. Fin Super is amazing stuff… you need to try it for yourself!

Read on to learn some of the ways in which Fin Super is perfect for fishermen who want their gear to last as long as possible.

The first thing many fishermen do when purchasing a new reel is to open it up and pack the gear box with petroleum jelly or other kinds of greases or jellies. For good measure, they might also use the same stuff on the crank, the bail, the anti-reverse switch, and anything else that moves and might be prone to rust. Common sense, right? The parts of a fishing reel.

The problem with this method is that jellies, greases, and most sprays are wet and sticky. Not only do they create a mess, but they quickly attract particles of dirt, rust, and other nasty bits that end up forming an abrasive paste. Over time, this paste will do damage to the very gears it was meant to protect.

This abrasive paste also ends up adding friction, which is the opposite of what a lubricant is intended to do.

Because of its unique way of working, Fin Super causes none of these problems. All you do is make sure the desired area is clean, then spray it on. It works just like any other aerosol. It goes on wet when you apply it, but the MicPol® particles immediately go to work penetrating and coating the surface area.

Because it remains dry, it will not collect any particles at all. That means no nasty, abrasive paste. There is no messy residue, either. You won’t believe how neat it keeps things.

Of course, anyone who does a fair amount of fishing isn’t terribly concerned about a mess. After all, if fish guts don’t bother us fishermen, nothing much will. The real benefit here is the performance and protection that Fin Super offers. It will last up to 10 times longer than other lubricants, thanks to the micronization and polarization of the lubricant particles.

The other major bonus is that Fin Super is hydrophobic. It repels water instantly. That means two things: rust has no chance to form, and Fin Super won’t wash off the way other lubricants do.

So, with just a few quick squirts from an aerosol can, you’ve got lubrication far superior to what any other spray can offer you, and you’ve also got extended protection against rust.

Although Fin Super can’t reverse the damage done to reels before its application, it can always help protect against future damage in the same way it helps new reels. The cleaner your reel before application, the better Fin Super will work.

To clean your old gears, Interflon recommends using Eco Degreaser, a human- and environmentally-friendly degreaser that comes in a spray bottle, ready for instant use.

It might not occur to most of us to lubricate our line guides, but in fact it makes a lot of sense. It gives you that little extra something when you’re casting.

Sport fishermen in particular understand how important it is to be able to cast accurately and quickly in order to pounce on that promising ripple on the water, or to target that likely structure where a plump bass might be lurking, just waiting to make your day. Spraying Fin Super on your line guides will make the passage of the line much smoother. It does this simply by reducing friction. Because it dries completely after application, it won’t come off due to the rubbing of the line.

And because Fin Super was originally formulated for use in heavy industry, it can withstand all kinds of extreme conditions–including high-pressure salt water spray. Any other kind of lubricant spray, oil, or grease will come off line guides after just a few casts. Fin Super lasts a long, long time.

Ever notice how hard it can be to unscrew a reel cap after a year or so of use? Sometimes you risk breaking something because of the force required to get it off. This is especially true in salt water, which as any fisherman can tell you is not only incredibly destructive to all kinds of equipment, but can make connected pieces really hard to get apart again.

Spraying threaded pieces, pieces that insert, or pieces that require fastening with Fin Super means that no salt water will be able to penetrate that area–even the tightest places you might think nothing, not even air, can get to. No penetration means no water touching the surfaces, which means no rust can take place.

Not only that, but remember Fin Super’s ability to repel any kind of particle, simply because it remains dry. There is no way for anything to stick to it. Even years later, equipment that was treated with Fin Super before assembly remains much easier to take apart, and much better protected against corrosion.

Fin Super can be sprayed directly on any piece of equipment. If you’re good at avoiding underwater obstacles but find rust is the biggest killer of your favorite lures, such as mackerel jigs, squid rigs, or other metal lures, give them a treatment with Fin Super. It will protect the finish, and will protect them against rust. It will even help keep your hooks sharper longer.

A sharp, rust-free hook is essential for ethical fishing, and it also makes it much less likely Mr. Fish will spit the hook out instead of biting down on it.

Use of Fin Super isn’t limited to your rod and reel. You can spray it onto any type of blade. It will adhere to the blade surface magnetically, the same way it does on any other application. Not only will it protect from rust, it helps keep blades sharper longer.

It also makes folding or hinging mechanisms (such as on a pocket knife, clasp knife, or a pair of scissors) work much more smoothly. No more painfully prying open sticky pocket knife blades with your thumbnail. Fin Super helps them slide open easily, over and over.

Most people don’t think of a tackle box as needing protection, but it’s exposed to just as much salt water as the rest of your equipment, and if it has metal parts, it’s just as prone to rust. You can apply Fin Super to these parts any time for protection and lubrication.

Even if your tackle box has plastic hinges, you can spray them with Fin Super to ensure they continue to work smoothly.

To help keep the inside of your tackle box cleaner, you can even spray Fin Super all over the interior. Once dry, it will prevent rust, sand, dirt, and any other nasty bits (like dried worms, fish guts, or blood) from adhering to the inside and creating a less-than-pleasant environment.

All you’ll need to do is turn it upside down and give it a good shake once in a while, followed by a quick spray with a hose for good measure.

Fin Super withstands all kinds of high-pressure water spray… it won’t wash off for a very, very long time.

The uses for Fin Super don’t stop with your fishing equipment. Fin Super is also dielectric, meaning it has insulating properties. You can spray it directly on electrical contacts to protect them.

One perfect example of this is the plugs that connect your trailer wiring harness to your vehicle’s electrical system. Every time you back your trailer into the water, that connection gets wet. Spraying it down with Fin Super will help repel water and keep that connection from needing replacement for much longer than if it was unprotected. You can even spray it on bare wires.

You can also use Fin Super on any other part of your trailer, by the way. Even if it’s already rust-resistant, spraying down rust-prone areas will provide an extra layer of rust protection that no other lubricant on the market can provide, and it will last far longer… up to ten times as long as some other lubricants.

Spray it on your ball hitch or bumper to help protect them, too.

If you’ve read this far, you’re starting to get the picture. Fin Super is something of a miracle substance. Developed for use in heavy industry, it has hundreds of uses around the home, the garage, or the workshop.

Check out this blog post entitled “14 Ways to Use Fin Super” for even more ideas on how Fin Super can be used to make your life smoother.

MicPol® technology means that Fin Super is the only product of its type on the market. Even those products that are marketed as ‘dry PTFE sprays’ don’t offer the same micronization of lubricant particles, or the same polarized adherence of lubricant to the surface. That means there is nothing else like Fin Super out there. It really is a one-of-a-kind product.

Grab Your Own Can Of Interflon Fin Super Now!

Interflon Fin Super 300 ML Can
$27.88
Check Current Price
We earn a commission if you click this link and make a purchase at no additional cost to you.