The Best Fishing Reels For Catfish (My Top 4 With Reviews)

I’ve always had the mindset that you don’t need a lot of fancy gear to pull in decent catfish. In fact, you only really need a good rod, reel, and line combination that’s appropriate for the size of catfish that you want to catch. Terminal tackle, bait types, and other odds and ends can be chosen based on your personal preferences and tactics. Today, I want to talk about reels. Since this is the part of your setup that will be handling most of the fight, you’ll want to make sure you pick the perfect reel from the start. Here are my four favorite options.

This is one of the two Abu Garcia baitcasters that I’ll be covering, and it’s personally my top pick as the best baitcaster for catfishing . Abu Garcia has built a name for itself as a company that provides high-quality reels for all types of fishermen. This Ambassadeur model exhibits the same quality as any other Abu Garcia reel. It has a centrifugal brake system that allows it to be stopped or slowed with extreme amounts of precision, and its drag system is designed to handle the toughest catfish fights. Unlike a lot of other high-power reels, this one has a bearing system that was precisely manufactured to keep it running smoothly for a long time. Its handles also make the most out of that smoothness and power. 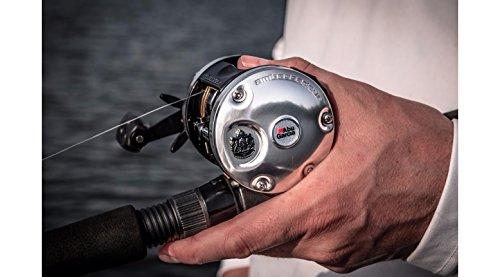 The handles are extended away from the casing and bent outward. They also have rotating torque knobs that allow you to really crank down on the reel when you’re facing something a bit bigger than your average catfish. This makes it easier to utilize the power of the reel, and it allows the smoothness of the bearings to really shine. Finally, it’s a basic barrel design. If you’re not familiar with round baitcasters, they’re a lot like the low-profile reels you might use for bass or pike fishing. They’re cast the exact same way, and they require the same skills. However, they’re large, round, and a little more difficult to get your hand around. That’s a fair trade-off for the large amount of line you can fit on the reel. 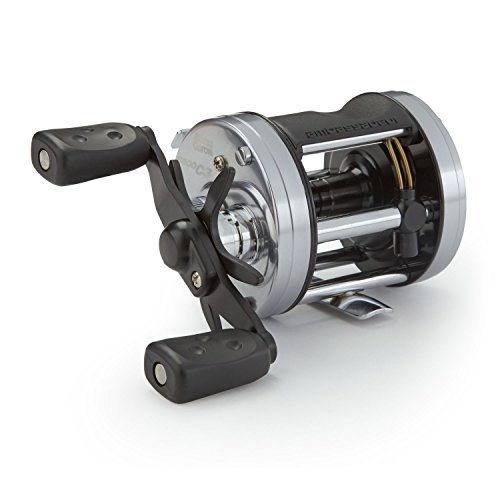 I recommend this reel for fishermen who really want to target massive catfish. It’s powerful enough to fight the biggest monsters in the river, and it’s easy to use in most situations. That being said, it’s a waste if you just want to catch small channel cats. You will drag those things out of the water like they’re nothing more than your standard bluegill.

You can read more about the Abu Garcia C3 as well as read more user reviews over on Amazon. Learn More On Amazon.com.

This is a more traditional-looking version of the Ambassadeur model. For the most part, it’s the same reel as my top pick. However, it feels a little less robust, and it’s even clunkier than my top pick. To top it off, it’s a little more expensive.

That doesn’t make it a bad choice, though. It has a 5:3:1 gear ratio, and that’s only a little bit slower than the 7:1 gear ratio of my top pick. The larger barrel also allows it to carry even more line.

It has the same drag system, and it has the same centrifugal brake system. However, it also has a thumb rest for when you’re waiting on a bite. That doesn’t sound like much, but you’ll love it during those slower fishing trips. Constantly holding the knob can get uncomfortable. 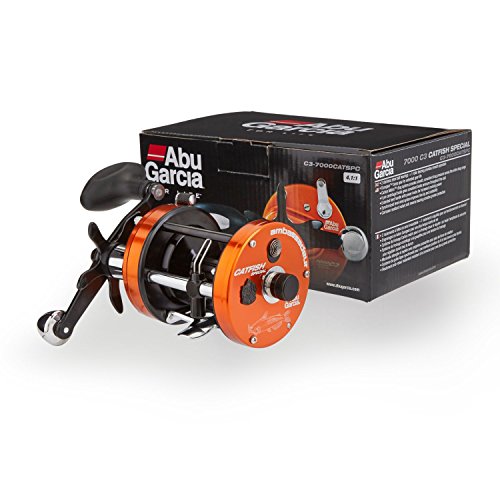 I don’t recommend this over the other Abu Garcia reel, but it’s still a great choice. It’ll definitely outperform any cheap reel you buy. However, if you get to choose between this reel and my top pick, you should definitely pick the latter. It’s faster, stronger, and less clumsy. This is something you can buy if you really want to match a traditional rod with a traditional reel. You can read more about the Abu Garcia Ambassadeur Catfish Special as well as read more user reviews over on Amazon. Learn More On Amazon.com.

This is the first spinning reel I’ll be reviewing, and it’s my favorite spinning reel for catfish. It’s relatively strong, quick, and reliable. It may not compete with a baitcaster when it comes to larger catfish, but it can handle small to mid-sized catfish like they’re nothing. The oiled felt drag system is unlikely to handle a 60-pound flathead, but it can reliably pull in fish that are around 15-25 pounds. Its spinning reel design makes it easier for beginners to use, and it has an anti-reverse roller bearing to help with the main issue associated with spinning reels. Since this is a catfish reel, I really like that it has an automatic bait feeder. I don’t really care about bait feeders on my bass reels, but they help a lot with catfish. If you turn the feeder on, it will allow catfish to run with bait until you turn it off, and it can allow live bait to swim around freely.

I recommend the Okuma Avenger if you don’t plan on pretending you’re Jeremy Wade while targeting the world’s biggest river monsters. This is a general purpose catfish reel that does its job admirably if you use it appropriately. Use it for channel cats and bullheads. Another thing I really like about it is that you can easily use it for any other fish that is likely to take live bait. Pike, muskellunge, snakeheads, gar, and other similar species can easily be picked up with this reel.

The Sharky III isn’t my favorite reel, but it’s just as good. Unlike the Okuma, it’s okay to use the Sharky III in saltwater or freshwater. That added layer of versatility makes it a great option if you live along the coasts, because you can easily end up fishing either type of water. It’s a little slower than the Okuma, but it uses carbon washers for its drag system instead of felt. That’ll help it last a little bit longer, and it adds a little bit of strength to the reel. The handle is capable of being switched around for left-handed fishermen, and the handle itself is easy to crank down on. Like the Okuma, the Sharky III has an advanced bait feeder that makes it easy to use live baits. As one final bonus, the Sharky III comes with a spare spool. That’ll allow you to avoid re-spooling your reel if a catfish breaks all of your line off, and you can also use it to quickly switch between two different types of line.

Overall, this is just as good as the Okuma Avenger. You can use it for all of the same stuff, and it has the added bonus of being able to resist saltwater. If you live on the coast, I’d definitely pick up the Sharky. However, I personally prefer the comfortable design of the Okuma Avenger. Pick what suits you best.

Things To Look For In A Catfishing Reel

In general, there are three things you need to consider when buying a catfish reel:

Those three factors affect every type of reel, but the real differences come in when you’re deciding between a baitcaster or spinning reel.  So below, we’re going to take a little closer look at both types of reels.

Baitcasters are pretty much your only option if you want to target monster catfish. They’re way stronger than spinning reels, and they can handle the immense strength of the largest catfish out there. They also have a higher line capacity. That means that you can drop your bait all the way to the bottom of most freshwater ponds or lakes to seek out fish that aren’t interested in coming to the bank areas. However, they’re clumsy. These aren’t the baitcasters that you’re probably used to using for bass. They’re big, round, and awkward. Don’t expect to cast them across a lake with pinpoint precision. They’re also overkill if you’re not targeting fish that weigh more than 20 pounds. They’ll make 15-pound channel cats feel like you’re reeling in baby bluegills with a swimbait rod. Not only is that a bit cheap, but it’s also boring.

These are basically the opposite of baitcasters. They’re precise, easy to use, and comfortable to hold. However, they also lack line capacity and strength. These are the reels you use when you’re at your local pond trying to pick up channel cats for a fish fry. They will not drag a world-record catfish out of a river, but they’ll get the job done for smaller fish. You’ll want to use these for shallower bodies of water, too. Since spinning reels don’t have a large barrel spool, they can only carry a small amount of catfish-grade line. You can toss your bait into the middle of a really deep pond, but it’ll probably end up dangling around instead of touching the bottom. Finally, they’re a lot easier to use, and I recommend beginners start out with a high-quality spinning reel. They’re better than those old push-button spincasts, but they’re not quite as advanced as baitcasting reels.

If you’re getting ready to set up your first catfish rod, I suggest grabbing an Abu Garcia Ambassadeur. It’s strong, quick, and reliable. It won’t be as good for smaller fish, but you can easily use your standard spinning setup for those. If you want a dedicated catfish hunter, you’ll want to use the Ambassadeur. If you do want a nice spinning reel to upgrade your current setup, I suggest grabbing the Okuma Avenger or the Sharky III. They’re both great reels, but I prefer the Okuma. It’s really all about your personal preference. If you enjoyed this short guide, try sharing it with your friends. Thanks for reading, and make sure to take a look at the rest of my content for all of your fishing needs.[tcb-script src=”https://api.tablelabs.com/t/mj9kpvqd.js” defer=””][/tcb-script]