From the Cascade Mountain Range running the entire length of the state, to the lowland creeks and rivers to the shady coastal streams, Washington is home to one of America’s most beautiful landscapes. And among all this scenery are bodies of water that are home to large populations of trout for you to target with your fly rod.

But the fly fishing opportunities don’t stop there. Washington is also home to a massive number of migrating salmon and steelhead which you can fish for when the trout just aren’t biting. That is what makes Washington such a great state for anglers like us who will venture out all year long.

Below are the trout fishing spots that you’re going to want to visit with your fly rod the next time you’re visiting Washington State.

The Yakima River is one of the country’s longest rivers. It’s more than 214-miles long, and the entire river is suitable for fishing year-round, and there’s four different reservoirs that help prevent melting snow from flooding the river.

The local Game and Wildlife Department has been managing the river for a while now, and that human intervention has allowed the trout and salmon populations to flourish. So, the river has caught the eye of every experienced fly angler in the country.

When you visit Yakima, you’ll most likely find a variety of rainbow trout, tiger trout, salmon, and various bait fish. They’re not too big right now, but the average size of the river’s fish has been increasing over the last couple of years. So within a year or two you’ll begin to see many more monster size fish caught in this river.

Unlike most of the entries on this list, Skagit River isn’t known mostly for its trout fishing. It’s most well known for its salmon and steelhead populations, and those fish tend to get pretty big in Skagit River.

However, actually gaining access to Skagit River can be very difficult. It’s flanked by rough terrain, and it’s far too wide for you to fish from the bank effectively. You’ll have an easier time if you take your boat out.

If you don’t have a boat of your own, or access to one, not a problem. There are a number of quality fishing guides in the area that will not only get you out on the water, but also get you into the fish.

Even though bank access can be difficult on the Skagit River, it’s not impossible. This website provides a map of some of the available bank fishing locations along the Skagit River.

If you want to enjoy the pure beauty of the wild, you have to check out the Hoh. Hoh River runs through the Olympic Peninsula, and it cuts its way through rainforests, mountains, and stunning valleys. In fact, the fish might not be the best part of the river. Its atmosphere is what catches most anglers off guard.

The Hoh River is well known for its excellent steelhead fishery, which peaks during the winter. The winter steelhead run in the Hoh River usually begins sometime in November and runs through January, when the number of steelhead drastically drops off.

But that’s not to say you can’t find steelhead here year round. Steelhead make their way up and down the Hoh River all year long. However, it’s the winter run when they show up in mass quantities.

Sauk River is more of a stream than a river and is also one of the best steelhead fisheries in the United States. The water is cold, clear and you have three different areas to choose from along this river. There’s a spot near the top of the river that is difficult to access, and it has the biggest fish, but the bottom is calm and easy to get to. The middle of the stream is extremely difficult to fish due to rapid waters and tons of boulders. However, it also produces the feistiest fish.

You do need to consider what time of year it is when you fish there, though. The water gets extremely murky when it rains in the later parts of May, and that makes it fairly difficult to navigate on the water. However, that’s when the steelheads are particularly likely to bite.

Skykomish River is a river that is located near Seattle so naturally, it’s a bit of a fishing hub. It has a large amount of cutthroat trout, and it has steelhead that frequently bite in the summer and the winter. Salmon are also pretty plentiful there, and you should expect to catch a few when you’re targeting the cutthroat trout.

Since it’s located near Seattle, you’ll have a hard time finding a day when no other people are fishing there. If you’re anti-social, you should probably stay away from it. Otherwise, it’s a pretty fun spot with plenty of impressive game fish.

This map, courtesy of riptidefish.com, provides information on the 16 of the best fishing spots along the Skykomish River.

The Grande Ronde River is probably one of the most overlooked trout and steelhead fisheries in the state. This is one excellent trout fishing destination that you might just find yourself fishing all alone, even throughout the summer months. This is partially due to the fact that the best stretch of river that holds some of the best trout fishing flows through a deep canyon which is only accessible by boat.

It’s in this stretch of river where the trout are numerous and eager to strike a passing streamer. Although the river is well known for its steelhead runs, you should expect to catch rainbow trout well over the 16 inch mark and much larger.

Running through the second largest city in the state of Washington is the Spokane River. And what’s surprising to some who aren’t familiar with the area is that this urban river is home to highly sought after redband trout, the local native species of rainbow trout. In addition to rainbows, anglers can expect to catch brown trout and cutthroat trout in the Spokane River.

Surprisingly, some of the best trout fishing in this river is just below Spokane Falls in the center of town. And it’s not uncommon to hook fish well over 18″ on this river! While you do have a shot at a truly great fish, the Spokane River has a very nice average trout ranging in size

The Calawah River is the smaller sister river to the Sol-Duc. The Calawah is known for producing some of the largest, hardest fighting steelhead in the state. The Calawah boasts spectacular rapids, crystal clear water and smart steelhead and requires the absolute most from every angler that chooses to fish its waters.

The Calawah River is a popular steelhead fishery and there’s fish to be caught here. But the currents on this river are quite tricky and the rapids can be pretty brutal. So I highly recommend hiring a fly fishing guide to take you on this one.

Naches River is one of the rivers that feeds Yakima River. It’s only a good fishing spot for a couple of weeks at the end of June, but during those times it yields enough rainbow and cutthroat trout, that it earned a spot on this list.

The trout caught on the Naches River aren’t known for being very large, but the fish are numerous. Typically, you can plan on catching rainbows that are about 14-inches in length or less. I would say that this is one of those spots that you go to when the time is right, and you fill up a basket of smaller fish for a nice fish fry. Don’t try to break any world records at Naches River.

If you love fly fishing for winter steelhead, then the Sol Duc River is a must visit location. The wild sea run trout that live in these waters are plentiful during the winter months. But you should know that the river is forever changing and can be harsh at times. That’s why I recommend hiring a fishing guide to take you on this river as well.

There are several salmon species also call the river home, but the main draw here is by far the steelhead population. 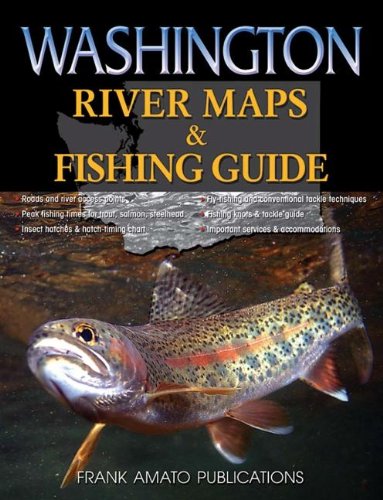 Washington River Maps & Fishing Guide
$89.92
Check Current Price
We earn a commission if you click this link and make a purchase at no additional cost to you.

The Best Time Of Year To Catch Trout In Washington

Spring and fall tend to be the best seasons to target trout in Washington state, but you can fish for steelhead in the summer and winter, as there are typically steelhead constantly running up and down the rivers from the ocean. So, you can rotate your targets to fish year-round. Just remember to dress appropriately for the very harsh winters that you’ll have to deal with in most of the mountainous regions.

Types Of Trout Found In Washington

There are a number of different trout species that inhabit Washington’s waters. Some of the most common are:

You can also catch steelhead and several salmon species in the same fisheries.

Do You Need A Fishing License In Washington?

A fishing license is necessary to fish in Washington. You don’t need anything else, though. If you’re under 16, you do not need a license.

What Is Daily Limit For Trout in Washington?

The limit in most fisheries throughout Washington is five trout per day. However, some fisheries have their own specific regulations, so it’s important to check those out before you go.

As I mentioned, there are many other regulations in Washington that cannot be covered here. If you have more questions, or simply want to learn more information about Washington State’s fishing regulations,  you can check out the official regulations site here.