Penn Battle II Spinning Reel
$116.17
Check Current Price
We earn a commission if you click this link and make a purchase at no additional cost to you.

Review and Description of The Penn Spinning Reel

Fishing is a pastime that relies on many factors with respect to whether you have a ‘good day,’ or not. Many of them are beyond your control such as the weather or the keenness of the fish to nibble on the bait. However, what you can control is the fishing equipment you use and a key component of that is your fishing reel.

One of the world foremost manufacturers of fishing reels is Penn, and in this review, I am going to put their ‘Penn Battle 2 Spinning Reel’ through its paces, to see if it functions, as well as its best seller tag, suggests.

The Penn Battle 2 Spinning Reel carries the name of what many argue is the finest fishing reel manufacturer in the world. Penn Fishing can certainly boast of a fine array of fishing reels that they have produced over the years, and with the Battle 2 Spinning Reel, which was launched in 2014, they have produced one that it seems they want to appeal to as broad a range of fishing enthusiasts as possible.

It looks, feels and operates like a very high-quality reel, so those who want a reel that will perform well and has durability will be pleased. However, anyone thinking that to purchase such as a reel you need to pay top dollar for it, will be delighted that it also offers exceptional value for money.

In terms of use, it is a spinning reel, that is primarily suited to saltwater fishing, although many who have used this for freshwater fishing will tell you it works equally well for that. It is easy and comfortable to use, and with a broad range of size options, there should be a model that suits just about everyone’s fishing reel requirements. 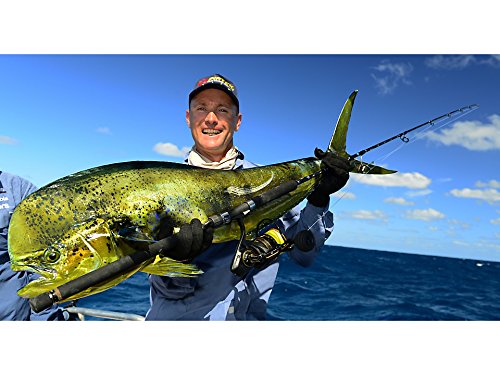 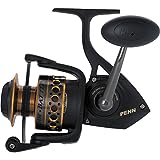 Knowing whether or not you are putting the correct amount of line on your reel can often be more guesswork than anything that is measured properly. If either too much or too little line is on the reel it can cause issues when you are casting.

To help resolve this, Penn uses a simple, but effective, solution, and that is to have line capacity rings on the spool, that shows you how much line is on it. As well as that, it also indicates the amount of line which is out when drifting or when a fish is pulling on the line.

Sometimes when you are spooling braided lines, there can be some slippage which can be an issue especially when you need to have a lot of line in the water, when deep fishing, for example. There are several ad hoc ways that fishers deal with such as using duct tape or mono.

Rather than having to that, Penn has given you a much better solution with the Battle 2 reel. It employs a rubber inlay that effectively holds or grips the line and therefore the problem with slippage should not occur.

Ball bearings are a critical component of spinning reels, especially as they impact on the both the retrieve and drag elements of the reel’s operation. Poor quality bearings that corrode easily or are prone to becoming dirty mean that the operation of the reel is compromised to the point where eventually it is no longer usable.

In the Battle 2 reel, Penn has used 5 ball bearings, and these are sealed. The primary advantage of this is that the corrosion and issue with the bearing becoming dirty are all but eliminated ensuring that the reel operates efficiently and for longer.

I should also point out that these ball bearings are made from stainless steel which further adds to the reel’s overall resistance to corrosion, thus allowing prolonged usage.

It has to be said that in order for them to be effective, and to stand up to rigors of every fishing trip, fishing reels need to have a fair degree of strength and durability. While each individual component will have some part to play in that, it is the body of the reel which is going to determine the overall strength and durability.

For that reason, you will be pleased to know that the Penn Battle 2 has a full metal body which also includes the rotor and the side plates of the reel. The result is a reel which is extremely tough and therefore going to last you, and although it may add a little to the weight, it is not so much that it feels too heavy.

Line management is something which the bail wire plays a huge role in and therefore if it is inferior and thus prone to damage or warping you are going to experience issues like a tangled line or unevenly wrapped line on the spool.

To eliminate that problem Penn has designed the Battle 2 with an aluminum bail wire. which should have the strength and durability necessary. This means that it will guide the line on to the spool evenly at all times and should do so for the lifetime of the reel.

One of the beauties of fishing is that there are so many ways it can be done, with variations in types of water you can fish in, the numerous locations you can enjoy it, and the size and type of fish that you might choose to catch.

These variations mean that in terms of fishing equipment there is certainly not a one size fits all with multiple choices needing to be made with regards to rods, hooks, lines, and reels. One choice that you need to make is the size of the reel, and that can only be done if the manufacturer has produced a range of sizes for a particular reel that they produce.

In the case of the Battle 2 reel, Penn has created no fewer than 8 different sizes which range from the ‘1000,’ which is the smallest up to the ‘8000,’ which is the largest of them. I’ll outline more details on all the sizes in the ‘Sizes/Differences’ section below.

One problem that exists when a fish is pulling on bait and dragging the line is that there is back play on the rotor. There are several ways to combat this, but the one used in the Battle 2 reel is an instant anti-reverse. This uses a one-way bearing within the design of the reel which prevents the rotor from reversing,

The drag system employed within the Battle 2 is Penn’s bespoke HT-100 drag system. This was developed by Penn in the 1980s as a means to improve upon the asbestos  drag system that was found on fishing reels at that time.

The key feature of the HT-100 drag system is that it uses washers which are made from carbon fiber. The significance of the carbon fiber is that when a fish decides to put up a fight and is pulling the line, the heat which is generated from the friction within the reel as the line is pulled is reduced.

The advantage of this reduced friction and reduced heat is that there is less chance of line breakage as the tension is maintained and it ultimately gives you a greater chance of landing the fish.

With a lot of focus being on how a fishing reel operates and the mechanics of that, a key feature that is sometimes overlooked is the finish. Specifically, this will be the paint and it is important because this is what is going to be most exposed to the elements and therefore is the first line of defense for the fishing reel in terms of avoiding corrosion, for example.

Despite their great reputation, one criticism that has often been made of Peen is that some of their reels were more prone to corrosion than others, so I’m pleased to say they have obviously listened. With the Battle 2 reel, they have finished it with high-quality paint, which is going to provide excellent protection against corrosive elements such as saltwater spray.

While how a fishing reel looks isn’t always going to be its prime appeal, nevertheless the finish that the higher quality provides also makes the Battle 2 reel look a very classy piece of fishing equipment and adds to the feeling that this reel is one of high quality. 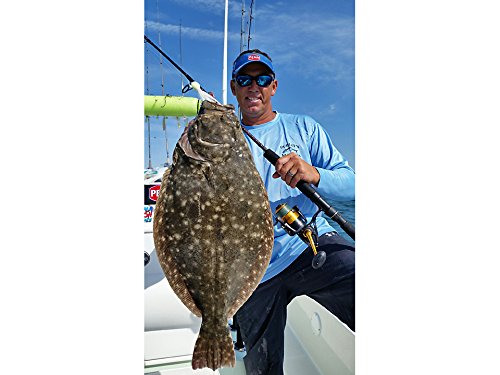 In the table below you find the details of each of the 8 different sizes of battle 2 reels which Penn has produced. Starting with the ‘1000’ you will see that the first and second columns show the yards per pound specification for mono line and braid line across three different lengths.

Next, we have the gear ratio of which there are three different ratios across the range, and then there is line retrieve which shows how many inches of the line you will retrieve for every turn of the handle. You will note that for this, the ‘80000’ version is double that of the ‘1000.’

The final column shows the weight of each individual reel, and as you would expect the ‘8000’ has the highest weight, which is more than three times that of the ‘1000’.

Alternative To The Penn Spinning Reel 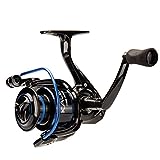 With the Penn Battle 2 being such excellent value for money, you might also want to look at the KALEX XS2 Spinning Fishing Reel if you are looking for an alternative that offers likewise. It has 5 different sizes to choose from, a carbon fiber drag system, graphite rotor, and body, plus it has an instant anti-reverse clutch.

Below are some of the most common frequently asked questions about the Penn spinning reel.

1. Which size is most suited to pier fishing?

For the sorts of fish that you will be catching while pier fishing, such as trout and flounders, the 4000 size reel should be able to handle most of them without much difficulty.

2. Can this reel be used in freshwater?

Of course it can. many users of this reel use it for both freshwater fishing and saltwater fishing, which in many cases means they only need to buy one reel instead of two.

3. How long is the warranty?

The normal warranty on this reel is 12 months.

4. Will the Battle 2 reel work with a 6-foot jigging rod?

It will, but you also need to ensure that the line you use, and the size of the reel you purchase is suitable for the type of fish you are trying to catch.

Penn Battle II Spinning Reel
$116.17
Check Current Price
We earn a commission if you click this link and make a purchase at no additional cost to you.

As you would expect with any fishing reel bearing the name ‘Penn,’ the Battle 2 not only looks a quality spinning reel, it operates like one too.

With more than its fair share of quality features including a heavy-duty bail wire, line usage marking and Penn’s very own HT-100 drag system, it offers every fishing enthusiast an excellent addition to their fishing equipment.

In addition, it is finished very well which not only gives it a great look but provides excellent protection against corrosion meaning the life of this reel is prolonged, adding further to its great value for money.