How To Hold Trout And Catch And Release Trout Unharmed

More and more there seems to be a trend towards people practicing catch-and-release fishing. Between personal choices, selective harvest, and special regulations; catch and release techniques should be known by all anglers.

For many trout anglers, catching and releasing fish is common practice. However, many would be surprised to know that these fish which were released to go forth and survive, may actually die not longer after due to stressful and improper handling.

Why Catch and Release Fishing The Right Way Is So Important

Trout, in particular, are an easily stressed fish and can suffer dire consequences from improper catch and release tactics. Warm water, long fights, improper handling, and poor hook removals can all spell disaster for a released trout.

Trout that are caught and released can often experience much higher mortality rates than most would suspect after seeing them swim off. The stress and damage can have lasting impacts that can be fatal to the trout in the hours or days to come. 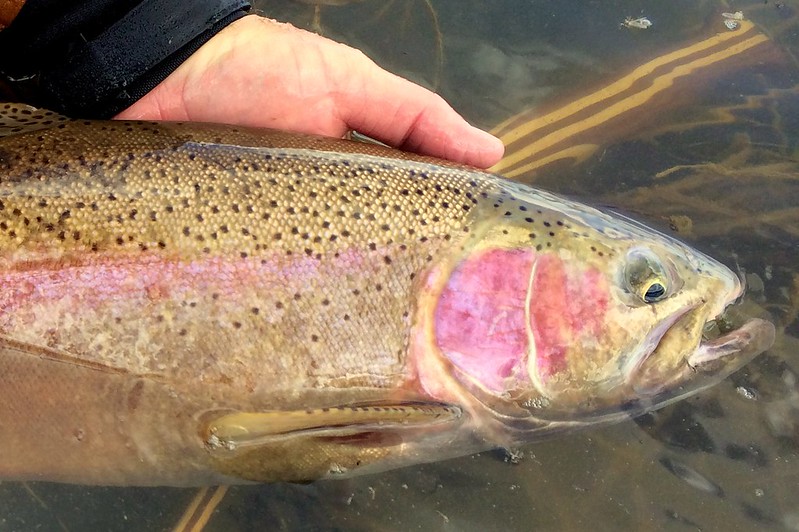 How to Catch and Release Fish

To successfully release a fish to survive another day takes some thought and execution. Simply pulling the fish from the water, taking the hook out, and watching it swim off may not always be good enough to allow the fish to survive.

If you expect a trout to survive after being released you need to give it the best chance at survival. Let’s take a closer and more defined look at the all the techniques to properly handle and release a trout.

If you intend to release a fish (or at least want that option) you need to make the fight somewhat easy on the fish. Do not play the fish for excessive lengths of time leading to exhaustion. Instead select the appropriate rod size for the fish you are targeting and try to land the fish in a timely manner. For trout, warm water can be dangerous, exhaustion and stress come on much quicker in warm summer situations.

When landing a fish to release, you do not want to take it out of the water for too long. Dragging it up onto shore can be a stressful endeavor for trout. Ideally, a rubber coated landing net is the best case scenario for catch and release.

A landing net allows you to keep the fish in the water and safely pull it out of the water for short periods. If you must land a trout without a net, try to gently drag it up onto smooth and wet rocks. Better yet, try to simply remove the hook with the fish still in the water.

First rule of handling fish for catch and release is to always handle fish with wet hands. Dry hands strip the fish of it’s protective slime coating and can cause stressful damage.

When handling the fish, give it a firm grasp so it does not flop and injure itself. Under no circumstances should you touch the gills of a fish you intend to release. No grabbing underneath the gills for the trophy shot either. For fish, and trout in particular, this can easily spell death later on.

The last step in dealing with a fish before releasing is removing of the hook. If all you plan on doing is catching and releasing fish on a certain day, having a barbless hook is the best way to go. Even still, a fish caught on a barbed hook can still be released.

Using a pair of pliers or hemostats is the safest way to remove a hook for the fish. With the fish in the net, water, or in your wet hands. Try to grab the shank of the hook with the pliers and twist it so that is pops out. Oftentimes, this can be done without ever removing the fish from the water or handling it.

Last, but certainly not least, comes the release of the fish. If you followed all the proper steps up to this point, the fish should be ready to swim off to survive another day. However, you also want to assess the condition of the fish at this point and make sure it is healthy enough to release.

In warm water conditions, or after a bad hook deep in the throat, chances of survival will be severely limited and you should consider keeping to fish for eating later.

If the fish appears lively and ready to go, keep the fish submerged in the water and grasp around the tail of the fish. Hold onto the fish while gently slowly moving the fish back and forth in the water to facilitate oxygenated water to flow over its gills. Usually, in a matter of seconds, the fish will lurch forward and out of your hands to swim away. In this scenario, you can rest assured the fish likely lived on.

Sometimes, it may take several minutes for a fish to fully revive. Continue to move the fish back and forth in the water until it is able to swim off on its own accord and potentially handle the current of a stream or river.

How to Take a Picture Of A Fish

What if you still want to take photos of a fish you intend to release? This can still be done and allow for successful release of the fish so long as you take some precautions. As always, try to limit the amount of time the fish spends out of the water.

If you have a friend, have them handle all the camera stuff while you keep the fish in the water, ideally in a net. When ready for a photo, gently lift the fish while giving it support with both hands from the water. 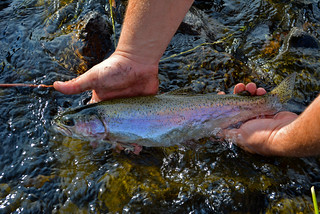 If you find yourself alone and want to get a picture of a fish before releasing, you have some other options. When I am alone, I try to find a very shallow piece of water in smooth rocks. Enough water to lay the fish in and keep it wet but not quite enough for it to swim in.

A tired fish should lay there long enough for you to snap a nice natural looking photo of the fish laying in wet rocks. For smaller trout, you can also briefly lift them from the water with one hand and quickly snap a photo with the other.

Never stress a fish to the point of exhaustion or suffocating for the sake of a photo if you intend to release it.

Stigmas and Considering the Right Fish to Keep

Many trout anglers are die-hard catch and release fishermen. Often to the point of shaming anglers who decide to keep fish for consumption. Most populations of fish can handle limited harvest, therefore you should not feel ashamed for keeping a fish or a few to eat if the regulations allow it.

The best fish to keep are medium sized fish. Not only are these often the best eating with the most firm flesh, but it is also the best fish to take out of a population.

For trout, the ones that end up in my kitchen are usually between 8 and 14 inches. Keeping the medium sized younger fish is a sustainable method of harvest. Keeping large breeding adults can do more damage to the population. Plus, older fish will never taste as good and don’t fit to well in the frying pan.

When catching and releasing fish, just keep the big picture in mind. Limit stress to the fish and try to keep the fish in the water as much as possible. Trout are easily stressed fish compared to many others and practicing proper catch and release tactics is imperative if you want the fish to survive.

Many people who don’t practice these techniques release fish only to have the fish unknowingly die later on the bottom of the lake. In this case, the fish would have been better of kept for the frying pan.

VIDEO: How To Catch And Release Trout

1. TROUT HOOKS: A Guide To Choosing The Best Hook For Trout Fishing

2. Do Fish Hooks Dissolve In A Fish’s Mouth?

3. How To Remove A Fish Hook From Your Skin (And Save A Trip To The ER)

5. Fishing For Beginners: The Basic Gear And Tips To Get Going