Bank fishing has a reputation for being a limited fishing method. Up until a few years ago, bank fishermen had to rely on dragging their lures across the bottom of ponds and lakes to get an idea of what they were working with. All that really did was give you a partial idea of what the bottom looked like. If you wanted to know where the fish were, you’d just have to cast in a line and hope you got a bite. Now, you can use a castable fish finder to get the same detailed maps and pictures that boat fishermen have had forever. This new contraption has made bank fishing a lot more reliable, and it has given bank fishermen the tools they need to compete with boat fishermen.Here are the three specific models that I like the most.

The Deeper Pro+ Smart Sonar castable fish finder boasts the flexibility of most other shore-based fish finders, but it has a tremendously upgraded range, and it’s made from premium materials. The Pro+ is heavy enough to cast up to 330-feet, and it has a WiFi range that’s long enough to maintain a solid connection with your phone if you cast it out that far. That’s a huge upgrade over less impressive models that often cast farther than they can maintain a signal. However, I recommend using a heavy rod with plenty of backbone when you cast it. It’s comparable to casting a large swimbait, and less powerful rods will flop around like a wet noodle with a Pro+ on the end of them. 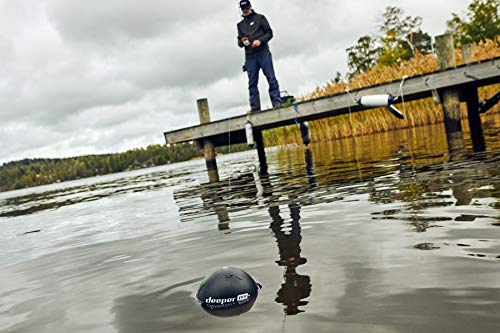 Once it’s in the water, it can scan up to 260-feet below the surface. Most fishing holes won’t require you to scan depths that are that far down, but it’s nice to have, and it’s actually a more impressive range than what you’ll find on a lot of boat-based fish finders. As it scans, the Pro+ will not only deliver sonar returns to your smartphone, but it’ll create maps of the area for you to use during future trips to the same spot. The maps will include detailed views of structures, drop offs, flats, plant life, and everything else that a fisherman needs to know. Those maps are also capable of being saved and transferred to other devices. This essentially allows you to keep a stockpile of detailed maps for every one of your favorite fishing holes, and it makes planning fishing trips a lot easier. 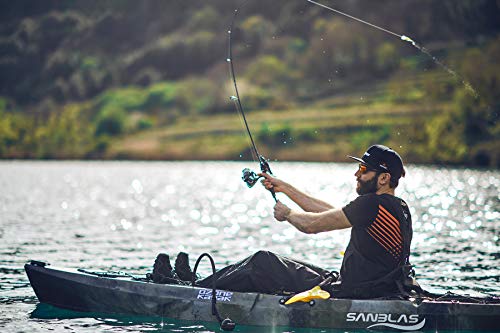 To make it even better, you don’t have to have phone service to use it. If you’re anything like me, you like to go out to remote fishing spots to fish in peace. Most other sonar balls won’t work without being near a WiFi source, but the Deeper Pro+ generates its own WiFi signal. So, you can take it anywhere you please, and it’ll work like a charm. While sonar balls were designed with shore fishermen in mind, the Deeper Pro+ has a little bit to offer for all kinds of fishermen. It’s resilient enough to stand up to the cold temperatures involved with ice fishing, and it’s tough enough to survive being trolled through rocky waters on the back of a bass boat.

This is easily the best shore-based fish finder on the market. That’s why I chose it as my top pick. Other models can perform admirably, but none of them match the quality and features of the Deeper Pro+.

Check out the Deeper Pro+ on Amazon.com

The Deeper Pro+ might be my favorite, but the ReelSonar is capable of doing a few things that even my top pick can’t. It’s not just a fish finder. While the ReelSonar doesn’t give you as many options with its fish finding abilities, it does work as a multi-functional fishing tool. Like other models, it can be tossed into the water to scan the bottom, but it can also be used as a bobber. When you use the ReelSonar as a bobber, it functions exactly like a normal bobber. However, it continues to scan the water and return sonar discoveries, and it gives you information about the water’s temperature and depth. It also has a fish alarm built into it. 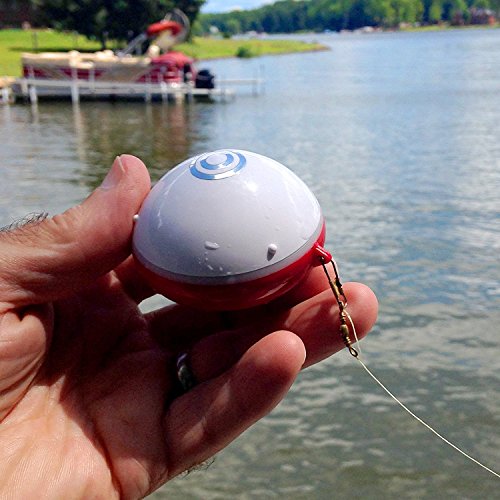 The fish alarm doesn’t work like the bells and clickers that you might have used in the past. It uses its sonar system to detect when fish are being extremely active near it, and it sends a notification to your phone. This is helpful when you expect to be sitting around for quite a while because they’re suspended. Instead of sitting there and growing more bored by the minute, you can use the ReelSonar to tell you when the fish are actually likely to take your bait. 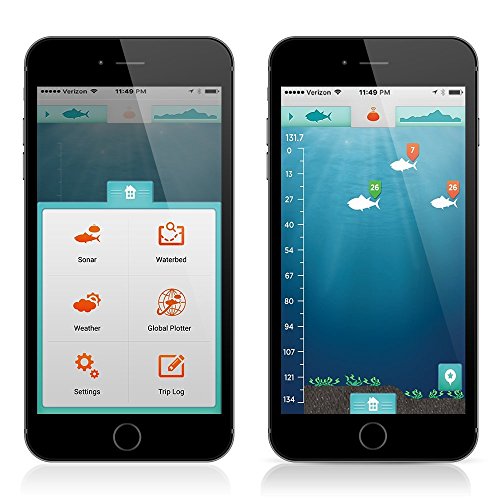 The scanning range of the ReelSonar isn’t quite as good as what the Deeper Pro+ has, but it is impressive. It can scan up to 160-feet, and it can maintain a reliable connection from 100-feet away. That’s more than enough range for the majority of fishermen, and it’s enough to cover pretty much any freshwater fishing hole.It doesn’t require WiFi to function, but a few of its features do require WiFi. You can receive sonar returns with your smartphone as long as you have a phone that is Bluetooth Smart enabled, and you can save the maps that it generates to your phone. 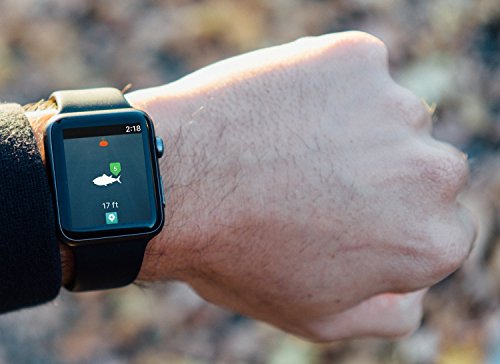 However, the iBobber ReelSonar also functions as a camera, and it allows you to upload your fishing pictures to social media immediately. That’s not a necessity, but every fisherman knows how great it feels to show off a great catch. If you want to use that feature, you’ll have to have a WiFi signal. Since the ReelSonar is also a high-tech bobber, you’ll be happy to know that it has a built-in LED light on top of it. This makes it a great option to use for night fishing, and you won’t have to worry about bringing along those annoying bobbers that barely glow in the dark.

The iBobber isn’t my top pick, but it does a lot of things that the Deeper Pro+ can’t. This is simply a different style of fish finder, and it’ll appeal to people who want an option that floats on the surface.

Check out the iBobber on Amazon.com

The Vexilar SP100 is a great budget option. It lacks the range of the other fish finders I like, but it has everything you need to accurately map where the fish are hanging out. The design of the Vexilar is an awkward one. It resembles a green and white bobber with boat propellers jutting out of its sides. The design may look weird, but it has proven to be great for trolling and repeated casting. I recommend keeping it out of large rock formations, though. Those extra bits might get snagged. The range on the Vexilar isn’t outstanding, but it can scan depths up to 150-feet. That’s enough to see the bottom of most freshwater spots. However, it can only maintain a signal for about 70-feet. 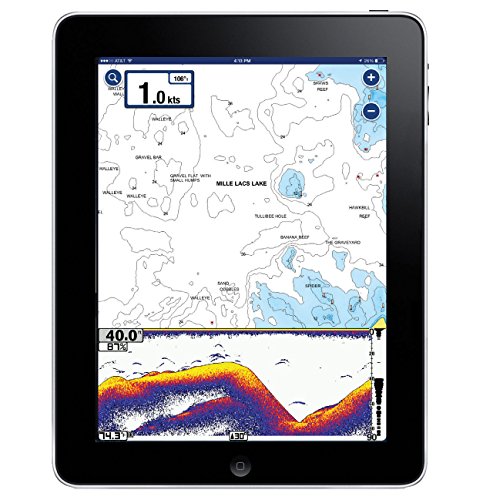 That’s not a lot of casting distance, but it’s fine for mapping the shoreline or checking out small ponds. If you take it along in a kayak, it’s plenty of range because you can move around on the water. Like the other suggestions I’ve made, the Vexilar doesn’t require WiFi or cellular service. It creates its own WiFi connection with your phone. One thing that strikes me as a concern is the battery life, though. It uses a basic lithium-ion battery, and it doesn’t have a very long battery life. You can expect to use it for a couple of hours before you have to charge it. That’s not bad when you consider its price, though. This is one of the most affordable fish finders you can get, and you can easily circumvent its short battery life issues by turning it off as you travel around a body of water.

The Vexilar is great for fishermen who just want a basic fish finder that they can cast from their rods. If you aren’t interested in taking pictures or using fish alarms, this is the fish finder for you. However, make sure you have a plan to deal with its short battery life.

Check out the Vexilar SonarPhone on Amazon.com

Things To Look For In A Castable Fish Finder

As castable fish finders grow in popularity, manufacturers continue to add crazy features and designs to their products. A lot of them are useful, but there are 3 main features that I require from my fish finders, and I think they’re the most important things to look out for.

Signal range is the most important feature in my opinion. You can get by with a scanning distance of 100-feet or so, but you need to be able to keep a solid connection with your phone to use a fish finder accurately.

You do not want a fish finder that utilizes your phone’s cellular service or WiFi data. The second you go to a great farm pond or reservoir in the middle of nowhere, you’ll have nothing more than a glorified paperweight.

All of the fish finders I suggested create their own WiFi signal, and they can be used reliably anywhere on the planet. You don’t have to be next to cellular towers or other high-tech stuff.

This is important to me because I like to fish in spots where I can be left alone. The fish are left to grow to humongous sizes, and it’s a much more relaxing experience. I also don’t like relying on my phone company during my fishing expeditions. If you’re anything like me, you’ll want a fish finder that can be used anywhere.

You need to see more than just a digitized representation of a fish against a blank screen. Fish finders may be marketed as tools that show you where fish are, but I personally find them to be more useful for spotting underwater structures and natural features.

Any good fisherman knows how important structures, plant life, and drop offs are to fishing, and knowing where they are and how they’re shaped can be more useful than seeing an actual fish.

After all, your fish finder might not see an entire school of pan fish chilling out beneath a sunken tree trunk. It might not see a massive catfish hiding in the muddy bottom of a drop off.

The Deeper Pro+ is by far my favorite castable fish finder for shore fishing. It can outperform a lot of boat-based fish finders, and it makes life a lot easier when you have to fish from the bank. It’s also flexible enough to tag along during kayaking trips or ice fishing trips.

Regardless of which one you like the best, it’s about time you hop on the bandwagon and pick one up. These fish finders are giving bank fishermen an entirely new way to fish, and they’re giving them a lot of the advantages that boaters have had for decades.

3 of The Best Fish Finders For Your Kayak

(VIDEO) All About Deeper Pro+