The lipless crankbait is easily one of the most flexible and reliable lures a bass fisherman can use. There are tons of different ways you can use them, and they’ve been catching trophy-sized bass left and right for years.

Like most types of fishing lures, lipless crankbaits go by dozens of names. People from different regions have adopted their own nicknames for them, and companies have branded their own versions with names designed to help with marketing.

However, they’re all pretty much the same thing. A lipless crankbait is a piece of plastic, wood, or metal that’s shaped like a fish and painted realistically. What sets them apart from normal crankbaits is that they don’t have the plastic bill attached to their tip. 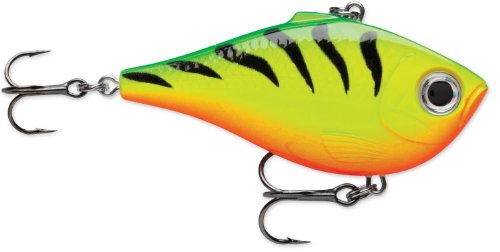 The Rippin’ Rap from Rapala has found its way into the tackle box of pretty much every experienced angler out there. It’s inexpensive, easy to use, and known for grabbing the attention of very active bass.

The Rippin’ Rap is known for its skinny and tall profile, and its rattle system is a favorite among fishermen. If you decide to pick a few of these lures up, you’ll be happy to know that they come in a large variety of patterns and sizes.

I personally recommend starting out with the Tiger Fire or Red Craw variations. They’re the ones I’ve seen the most success with, but you might want to try different ones depending on where you fish.

Before you run off to scoop up dozens of these at a time, you should know that they’re sinking lures. Once you cast them into the water, they’ll start descending fairly rapidly.That allows you to use a Rippin’ Rap at a large variety of depths, but it makes it harder to use it in the shallows.

If you do want to use it in the shallows, remember to retrieve it fast once it hits the water.

You can read more about the Rippin’ Rap lipless crankbait on Amazon or over at Rapala.com

The Strike King Red Eye Shad is almost as popular as the Rippin’ Rap from Rapala, but it has a couple of downsides, and it’s a bit of a one-trick pony. However, it’s probably the best crankbait you’re going to find for catching fish on the drop.

The Red Eye Shad can function just fine with various retrieval patterns, but it excels at catching fish as it sinks. Due to its unique shape, it tends to dive and violently shake until it smacks the bottom. That erratic action can drag in angry bass from a surprisingly long distance, and they tend to attack it relentlessly once they get to it.

If you want to consistently hook into the meanest bass in the lake, this is a great lure to use. However, it’s not perfect. The paint job tends to chip pretty easily, and since it hits the bottom a lot, you’ll find yourself replacing it pretty often.

The eyes also have a tendency to pop off when it gets slammed into hard structures in the water. Those aren’t major problems. You can expect that to happen with most lures, but it’s still worth considering before you decide to plan an entire trip around the Red Eye Shad. I suggest bringing along a few backup lures.

You can read more about the Strike King Red Eye Shad lipless crankbait on Amazon.

The Lucky Craft is one of those lures that appeals to some people and turns off others. It’s a pretty basic type of lure, and it’s quite expensive, but it is known for catching monsters.

It works best for bigger fish because it only comes in one size, and that size is 3/4 of an ounce. It’s a 3-inch lure with a lot of weight behind it, and it’s just not going to appeal to a lot of bass that have freshly spawned.

What helps to set the Lucky Craft apart from my other top picks is its rattle system. It isn’t the loudest, but it makes a unique sound because of the beads inside of it. They’re made from glass and brass. That unique sound can make your lure stand out in a pond full of Rippin’ Raps and Red Eye Shads. 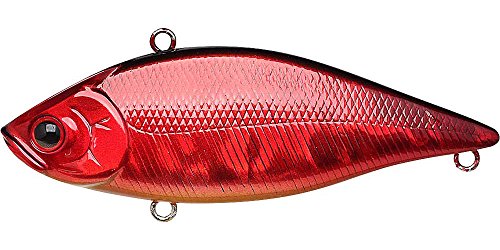 Despite its limited functionality due to its large size, I recommend that every fisherman throw at least one of these in their tackle box. Their action is wonderful, they last for quite a while, and they’re bound to catch you bigger fish than what most other crankbaits will.

This is the lure you use when you know there’s a big boy hiding in the weeds, and your Rippin’ Rap just isn’t attracting it.

You can read more about the Lucky Craft lipless crankbait on Amazon.

What Is A Lipless Crankbait? And Why Use It For Bass Fishing?

That bill is designed to help keep a lure at a certain depth as you retrieve it, and it somewhat prevents it from just sinking to the bottom. It also affects its action quite a bit. Since lipless crankbaits don’t have that lip, they can drop straight to the bottom, and they can do it pretty quickly.

These are lures that you use in a quick and dirty fashion to force bass into action. Also, they can be used at pretty much any depth. All you have to do is get a feel for how quickly they drop, and you’ll be able to start retrieving them when they reach the depth you want to fish at. It’s easy to do in deeper water, but you can fish these in the shallows if you’re quick.

When you first start using lipless crankbaits, they can be kind of confusing. Here are a few things that I’ve learned after years of using them. Don’t worry too much if you don’t fish like this. There are tons of ways to use lipless crankbaits, and none of them are really wrong.

When Should You Throw a Lipless Crankbait?

According to ShopKarls.com and the fine folks at Mystery Tacklebox, “Lipless crankbaits excel when bass relate to shallow water. Thus, Spring and Fall are the best times to toss a lipless crank. This bait’s tight wobble makes it perfect for cool water, and a lipless crank’s wheelhouse is between 45 and 60 degree water temperature.”

You might have a few different types of cranks in your tackle box and wonder what the difference between them are. Well, the fact is, a rattletrap is a lipless crankbait. Whats good about Rattletraps are the amount of vibration you can achieve out of the lure. Rattletraps will provide the most vibration out of all other lipless crankbaits. This is due to the fact that the Rattletrap’s wide head which displaces a large amount of water.

Here’s a great video that shows exactly what different kinds of lipless crankbaits look like and sound like underwater.

I chose the Rippin’ Rap as my top pick because it’s affordable, versatile, and reliable. There aren’t many situations where the right color of Rippin’ Rap won’t catch a decent bass. The other options are great, but they’re more specialized.

I highly recommend throwing a couple Red Eye Shads and Lucky Crafts into your tackle box to use in specific situations, but you can’t go wrong with a Rippin’ Rap.

If you liked this article, make sure to check out the other content on this site, and don’t forget to try out my favorite lipless crankbaits the next time you go fishing.  Above is a list of the crankbaits I mentioned in this post. You can click on any of them to read more about them and check availability on Amazon.