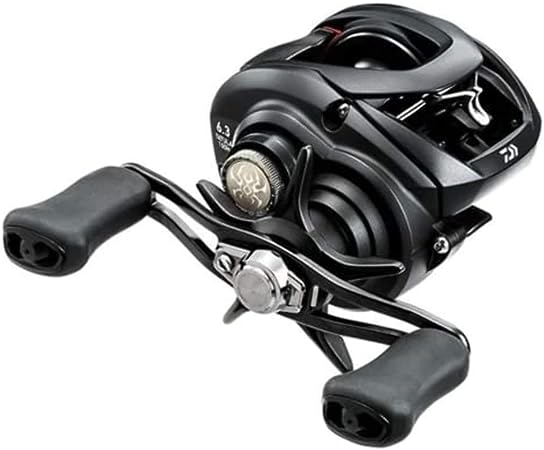 Using topwater frog lures really isn’t all that difficult. You cast the frog out on the grass or pads and hop it back to the boat. That’s the easy part. Hooking and landing the big bass smashes the frog is what can be challenging.

Typically speaking, experienced frog anglers will use a heavy line and a fairly stout rod to get these fish back to the boat or the bank. But there’s one more piece of equipment that’s critical to keeping that bass from heading back down into the weeds and getting him back to the boat.

The Reel You Use Is Very Important

That other critical piece of fishing equipment is your fishing reel.  And if you’re a serious frog fisherman, then you’re going to be using a baitcaster on a casting rod.

It’s your reel, combined with the solid backbone of your , that’s going to keep the fish up out of the weeds and up close to the surface where you want him.

In order to do this, there’s a few things that I look for when choosing a fishing reel to use frog fishing. Those things are:

In this article, I’m going to go over what I believe to be the 3 best baitcasting reels for frog fishing. After the reviews, I’m going to share with you some of the most important things to look for in a frog fishing baitcaster in the buyer’s guide. So don’t miss that part.

Let’s get started at taking a look at some of these baitcasting reels.

The Daiwa Tatula Type R is a very quick and powerful reel, and it doesn’t look too shabby, either. I have one minor gripe about it, but I’ll talk about that later. Let’s talk about the things I love about the Tatula.

First, the Tatula has an 8:1 gear ratio. That is extremely fast, and it beats most other reels in this price range very easily. If you want to rip a frog across the lake in record time, your best bet is the Tatula. There are other options, but they don’t tend to have the other benefits that the Tatula offers.

An aluminum body also boosts the quality of the Tatula. A lot of other popular baitcasters are made from plastic. Plastic weighs less, but it’s still plastic, and it breaks pretty easily. The aluminum body is lightweight, and it can take a beating.

It also has an exclusive T-Bar feature that supposedly allows it to cast further. I’m not convinced necessarily that it casts any further than other reels of the same quality, and if it does, the difference is negligible. So, you really don’t have to worry about that.

The drag system is tournament-grade, though. You shouldn’t have any problems fighting trophy-sized bass back to your boat with this thing.

My final bit of praise for this reel is for its simple nature. If you’re new to baitcasters, you know how annoying they are. Don’t feel bad if you’ve jumbled your line up. The first time I used one, I made a bird’s nest that was so complicated that I just chucked the reel and called it a day. The reel broke, but it wasn’t designed to be used as a baseball. So, that’s my fault. If I knew about this Tatula, I probably wouldn’t have done that.

The sweet spot for the Tatula is a half-tightened tension wheel and a maxed-out brake. Make slight adjustments to the brake if you need to, but keep your adjustments very small.

Finally, don’t let the price tag on this reel mislead you. Because this reel is definitely worth the money.

I recommend the Daiwa Tatula Type R to anyone who wants a baitcaster. It’s perfect for freshwater fishing. If you’re targeting bass with frogs, you’ll love this thing. However, if you’re on a budget, there is another option on this list that you should look at first. 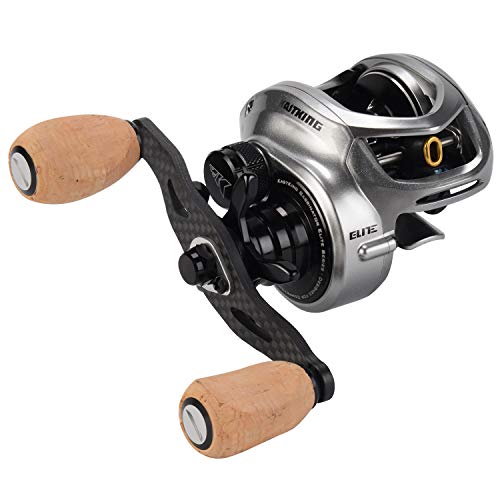 I have a complicated relationship with KastKing. Some of the company’s products have disappointed me pretty badly. Fortunately, the Bassinator isn’t one of them. It’s a reel that can compete with the Tatula, and it’s a high-quality product. Let’s get into it.

Multiple Gear Ratios To Choose From

The Bassinator comes in several different gear ratios. I personally recommend the 8:1 version. It’ll move just as quickly as the Tatula, and you need that speed to properly use a frog lure.

This reel also has an aluminum body and cork handles. I really like the aluminum body, which is a requirement on any of my frog baitcasters, but cork handles tend to get worn out fairly quickly on these types of reels. I’m not a huge fan of them, but you might love them. I can see how many folks would really like them. In the end, It all comes down to personal preference.

The Bassinator has ten ball bearings and a single roller bearing to keep it running smoothly. It doesn’t feel any better than the Tatula, but if you’ve never used the Tatula, it’ll feel as if you’re cranking down on a make-believe reel.

The drag system is technically more powerful than the one on the Tatula, but it’s not built to the same quality standards. It’s not designed to be a tournament-grade drag system. It is enough to pull in really big bass, though.

I recommend the Bassinator if you don’t like the black and red color scheme of the Tatula. Otherwise, the Tatula is a lot better, and even costs a few dollars less. 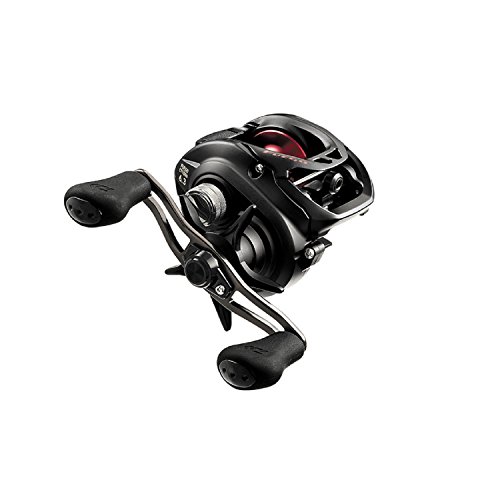 The Daiwa Fuego is more budget friendly baitcasting reel when compared to the first two reels reviewed on this list. However, even though It’s an inexpensive reel, it still provides you with everything you need to use frog lures efficiently to catch massive bass.

The Daiwa Fuego is not a very feature-packed reel. What you do get though are the necessities to fish frog lures for bass. When you consider its price, that’s not a bad deal. Most other budget-friendly baitcasters lack the performance traits necessary for fishing frog lures.

First, it has an 8:1 gear ratio. So, it’s on par with the other reels I’ve reviewed. It just costs half as much. Its frame is aluminum, too. However, it has composite side plates. That reduces its weight and price, but those side plates are weak spots. You’re unlikely to ever damage them, but it’s a possibility.

In essence, this is a slightly downgraded version of the Tatula CT. The Tatula CT isn’t as good as the Type R I reviewed, but it’s close to being an exact replica of it. So, this is pretty much a cheaper and less efficient version of the Tatula I reviewed. It’s not as smooth, and its drag isn’t as good. That’s about it. When you consider its affordability, I think you’ll agree that you’re getting a really great bargain.

I recommend the Fuego to two different types of fishermen. First, it’s great for anyone who is just getting started with baitcasters. It’s not a cheap piece of junk, and it’s easy to use. Basically, it’s one of the best reels that you can use to learn how to operate baitcasters.

Second, I recommend this reel to fishermen who want to experience what it’s like to use a higher end reel such as the Tatula, but can’t afford the price of a Tatula. If that applies to you, this is a great reel. If your pockets have a bit more cash in them, you should go after the Tatula. It’s a little more robust.

As with any other piece of fishing gear, there are a few things that you have to think about before you pick up a baitcaster to toss your frog lures around. In my opinion, these are the most important things to consider when looking for a baitcaster for frog fishing.

Have you ever seen a frog lazily floating around in the water while bass are feeding? If you have, you should consider it a once in a lifetime experience. Frogs are fast, and they move erratically. If you use a frog lure, you’ll want to mimic those movements perfectly.

To do that, you need a fast reel. Your standard 5:1 spinning reel won’t cut it. All of the reels on this list are 8:1 reels, but you can make a 7:1 reel work. One thing that you need to remember is that a higher gear ratio means that more line is dragged in with a single turn of the handle. If you start reeling too quickly, your frog won’t be in the water for more than a second or two.

A fast reel also helps you keep any bass you hook into out of the weeds. You’ll want a heavy rod with a fast tip to make it work. The faster reel won’t allow them to rush downward.

Always try to buy a baitcaster that has an aluminum frame. A lot of reels in this price range have graphite frames. My issue with graphite is that even though it’s extremely light weight, they’re quite susceptible to breakage. All it takes is one solid drop onto the rocks or the boat deck and you can easily fracture a graphite baitcaster frame.

In the cheaper price range, the reels are usually plastic, and those are almost always a bad choice.

I have spent a lot of time talking about drag systems in this article, and that’s because they’re important. You don’t technically need the high-end drag system on the Tatula, but you do need a drag system that can handle at least ten pounds of weight. Most bass aren’t going to weigh more than that, but when you find a real big boy who dives straight down into the weeds after smashing your frog, you’ll want a drag system that can handle the abuse the bass will throw at it. Do not use something with a sub-par drag system. You’ll risk burning your reel. When you use frogs, you’re targeting bass that are willing to put up a fight.

These three reels are the best reels I know of for frog fishing. All of them will serve you well, and you really only have to make a choice based on your budget and personal preferences.

However, I do highly recommend the Tatula. It surpasses all of my expectations of what I think a good frog reel should be, and I’m still kind of taken back that that Daiwa released it. As much as I love Daiwa, I did not expect them to release such a great high-end reel.